The Foldback section is an optional feature that provides stage monitoring mixes. Many times the main mix is used for this purpose is a setup with only the control room. However, for a separate studio and multiple monitor mixes for in-ear use, a separate set of Foldback buses provides that flexibility.

The Foldback bus was added in Ardour Version 6.0.

These foldback buses may be mono for a stage monitor wedge or stereo to allow in-ear or headphones to have different mixes for each ear, such as one's self in one ear and the rest of the music in the other.

A Foldback bus can be created in the same manner as any other bus is created, from the Track > Add Track, Bus or VCA Window. Once at least one Foldback bus has been created, the Foldback strip will appear in the mixer window.

Foldback sends can be created From the processor box context menu by selecting New Foldback Send and then the Foldback bus desired. 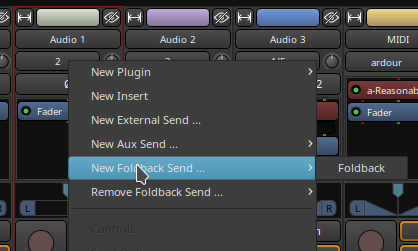 The invert buttons (one for each channel) invert the audio signal. This may be useful in some situations for controlling feedback. However, proper microphone and monitor placement or the use of head phones or in ear monitoring will be more effective.

The send box shows controls for each send. There is a context menu available by clicking mouse button 3 anywhere in the send box.

This is just like every other track or bus strip and works the same way.

This processor box is the same as on the other tracks and buses and allows for adding things like reverb to the Foldback mix without writing it to the track. It would also be possible to add in sound from a reverb bus instead.

This is only available in PFL or AFL mode as it uses the same code as the solo on other tracks and buses. It allows the control room monitor or headphones to hear what the performer will hear in their monitor.

This controls the output level being sent to the stage monitor.

This is similar to the output selectors on the tracks and buses. It differs in only a few ways. First it is never automatically connected. A Foldback bus is always meant to be directly connected to an output device and never to master or the monitor bus. The choices shown Therefore reflect this.

Just like the track and bus comment button, this allows opening a window to type in notes about the current Foldback bus for future reference.